From depths of despair
The path illuminated
I emerge transformed.

Meet the man who wrote the book that changed my life.

“I must not fear. Fear is the mind-killer. Fear is the little-death that brings total obliteration. I will face my fear. I will permit it to pass over me and through me. And when it has gone past I will turn the inner eye to see its path. Where the fear has gone there will be nothing. Only I will remain.” –Bene Gesserit litany against fear, Dune

I almost didn’t go. creativeLIVE was hosting a workshop with Tim Ferriss on The 4-Hour Life: Healthy, Wealthy and Wise. The author of the book that changed my life. And I almost didn’t go. Applicants were requested to submit a 60-second video about three skills they’d like to become world-class at in the next 12 months. I almost talked myself out of submitting a video. After all, who was I? Of the hundreds to thousands who would submit videos, why would they select me?

What was I afraid of? That they wouldn’t pick me? So what? I would have been no worse off than before but the upside was tremendous. Now compare these two: (1) they didn’t pick me or (2) they picked someone else. The former is a negative statement. The latter, positive. How significant those tiny differences are in my mind.

Fear is the single greatest thing that has kept me from living the life I want–and deserve–to live. I summoned up my courage to apply because my greatest fear is to live a life of unfulfilled potential. For all who came before me who sacrificed so that I might have. For all that I have overcome and achieved. For all the blessings and opportunities that I’ve been given. How dare I not live up to that potential? How dare I not even try?

So I applied. And got accepted. And my life has forever been transformed. The workshop was an incredible two days of learning from Tim and world-class experts. Surrounded by gifted students with the courage to pursue their passions who I am now fortunate to call my friends. To think that I wasn’t going to take the 60-seconds it took to turn on my camera and speak about things that I care about. Silly, no?

There are many, many life lessons I took away from the class but if I were to pick the three that have had the greatest impact on me:

It’s not as hard as you think.
You will come up with thousands of reasons not to try something. I don’t have the money. I don’t have the time. I don’t know how. There’s no way Tim would pick me. Before you’ve even tried you’ve made up excuses. Reasons why you’ll fail. So you don’t try or say “I told you so” when things don’t quite swing your way.

One of the most important things I’ve learned from the class is to take every one of the reasons I say something cannot be done, then challenge the assumptions I’ve made to arrive at that conclusion. Have an idea for an app but you’re not a programmer? Is there a way to test the idea without writing a single line of code? It’s going to be expensive. So how would I try it at 1/100th that cost? You’ll find that most of the assumptions you’ve made have easy though perhaps uncommon solutions.

Practice makes permanent.
Defending against an assailant twice your size. Making your first international toothbrush sale. Shooting an apple off someone’s head. Swishing free throws at greater than the NBA average. Writing seven NYT bestsellers. A wee woman deadlifting 136 lbs. What do they all have in common? They were all taught by instructors in the class. In less than an hour.

Whether you are shooting a basketball, starting the next big startup, or preparing a Michelin-star rated meal, the techniques used by these world-class experts were the same. DiSSS. Deconstruction, selection, sequencing and stakes. Then repetition. But not repetition for repetition’s sake. If you’re repeating the wrong things over and over again, then you won’t be achieving the maximum return on your effort. I won’t deprive you of the joy of learning just how to apply these meta learning techniques. For that you need to rush out and buy The 4-Hour Chef: The Simple Path to Cooking Like a Pro, Learning Anything, and Living the Good Life.

It can’t be done until it is.
Tim told us this story about a challenge he gave a bunch of Princeton students attending his talk on entrepreneurship. The challenge: get someone you think unreachable to call you back (e.g. Oprah, ScarJo, Warren Buffet). The stakes: a vacation anywhere in the world. Of the 60 students who came inquiring do you know how many achieved the goal? None. Do you know how many attempted? None. For the chance to sit on a beach in the Seychelles, walk the Great Wall of China or gaze upon the Colosseum in Rome, you won’t even try to send an email, tweet or make a phone call? The next time he gave the challenge Tim did something differently. He told the students an example of a student completing the challenge. Six students then proceeded to complete the challenge. One within 15 minutes.

History is replete with stories of people achieving things which had previously been deemed impossible. These breakthroughs then unleashed waves of successes from those who followed. You will be surrounded by haters and naysayers who will add to the list of reasons you already tell yourself why something cannot be done. Ignore them. Do the damn thing and make them liars. Haters have to be wrong every time. You just have to be right once. If you’re going to fail, then fail spectacularly. Aim to tutor one child and fail, chances are you might quit after a while. Aim to inspire 1,000,000 children and touch just 100,000, chances are you’ll have the fuel to keep trying. If not, you’ve just inspired 100,000 kids. 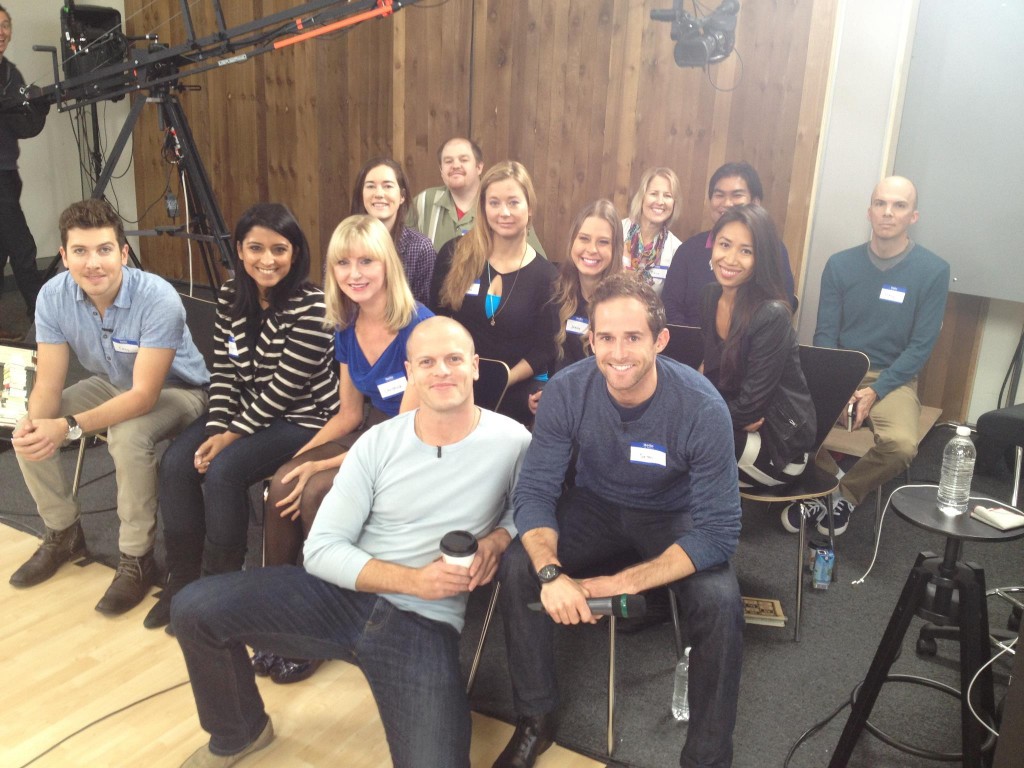 Two days. In two days I have been transformed. Rather than my bucket list being a sad list of things I’ll never experience, it is now a daily checklist of manageable steps to live my life to its full potential. Come back to my site to see just how I do it. To Tim and all the amazing instructors. To the creativeLIVE team. To my 4-Hour Life Crew. You ain’t seen nothing yet. Let’s do this.